The remains of what appears to be a large-scale domestic cannabis plantation have been dumped in a lane behind houses in the centre of a Welsh city.

Dozens of sacks containing plants, bottles of fertiliser, pots, soil, packaging and bamboo support canes – along with bin bags harvested cannabis leaves – were found in the Maindy area of Cardiff.It is believed the Class-B flytipping was carried out on Friday night or the early hours of Saturday morning. 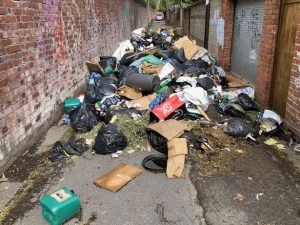 A man who lives and works in the area, and who wishes to remain anonymous, found the dumped rubbish and believes it is a former cannabis factory.

He said: “I went for my regular walk, and there is was – I couldn’t quite believe it.

“There’s no mistaking what it was – it’s an entire cannabis-growing set up, except the lights.

“There was a lot if it, so it must have taken a pretty big van or lorry to transport it all.

“It wasn’t there when I walked that way on Friday, so it must have been dumped that night.”