Bill Turnbull may not have been able to stop giggling as he tried cannabis but the moment was deadly serious.  The former BBC Breakfast presenter, 63, was filmed flouting the law during his quest to find new treatments for his advanced prostate cancer.  The cannabis oil concoction he sampled during Channel 4’s Bill Turnbull: Staying Alive contained the drug’s legal CBD compound – but also its illegal psychoactive element, THC.  Viewers will also see him giving up meat, going teetotal and smiling to boost feelings of positivity.  He says in the show: “I’m doing everything I can to learn how cancer can be staved off or, who knows, even cured.”  And after his experiences, he is calling on the Government to fund proper medical research on cannabis.  Bill says: “I think it is time we all had a proper conversation about the potential benefits of legalising cannabis for medicinal purposes.  “It is legal in more than 20 other countries. So if they are doing it, why aren’t we examining it more?  “This is something that’s been around for thousands of years and has been illegal for just over a hundred years.  “We could be missing something very beneficial.”  Bill was diagnosed in 2018 and has endured nine rounds of chemo. He is desperate to avoid more and says: “I refuse to believe I’m out of options.”  He was motivated to try cannabis by the experience of 14-year-old cancer patient Deryn Blackwell, who had a miraculous recovery after his mother gave him cannabis oil for pain relief.  He said: “I find Deryn’s story deeply inspiring. To come back from the brink of death like that is truly wonderful.”  Bill goes to visit Jeff Ditchfield, who has been growing cannabis, processing it for medicinal purposes and giving it to people who need it for the past 15 years.  Meeting Jeff – who has been arrested more than 20 times – in his garden workshop, Bill laughs: “This may look like an episode of Breaking Bad but Jeff is no Walter White, his drugs come free.” 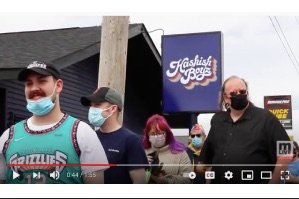