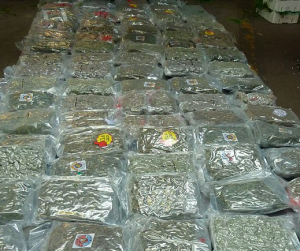 Some 600 kilos (1,320lb) of cannabis has been found hidden in a lorry that was supposed to be packed with crates of parsley.

Border Force officers inspecting the Spanish-registered vehicle discovered about £3million of the drug at the port of Dover earlier this week.

A Spanish man was arrested and the National Crime Agency is now investigating.

And yet another huge bust in rural NSW (Australia)