The mayor of Kansas City introduced an ordinance on Wednesday that would end all penalties for marijuana possession under the municipality’s local laws. He also plans to pursue efforts to remove other “minor drug offenses from our code.” 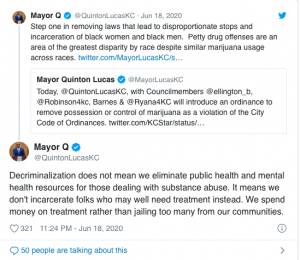 Mayor Quinton Lucas (D) and four members of the City Council filed the cannabis measure, which would repeal a provision of the Code of Ordinances stipulating that possession of 35 grams or less of marijuana carries a $25 fine and more than 35 grams is punishable by a $500 fine.

“One of the ways we improve police-community relations is by eliminating laws that for too long have led to negative interactions, arrests, convictions, and disproportionate rates of incarceration of Black men and Black women,” Lucas said in a press release. “Reducing petty offenses—such as municipal marijuana offenses—reduce these negative interactions each day.”

Job -Joint Roller. -” We break the nugs by hand and roll with a gluten free fusili noodle for the best airflow.”