The West Midlands Police‘s Walsall Taskforce has taken down a weed operation running out of an unused pub in Willenhall town center last week, seeing more than $600,000 worth of weed during the raid. The task force used a drone with a thermal camera to see hotspots within the building. 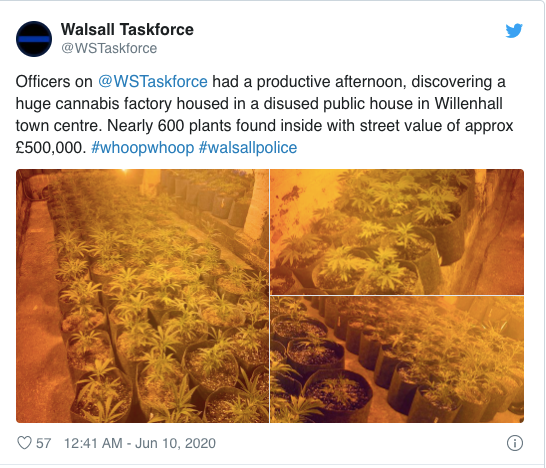 The thermally equipped drone was able to see the heat produced by the high-power lights used to grow marijuana, essentially giving the police the ability to see through the walls to get a better idea of what was going on inside.

The cannabis operation was said to have been spread out over two floors of what was once a pub. On Tuesday, June 9, police moved into the Castle Pub, seizing all the marijuana in the facility along with the equipment used to grow it. Currently no arrests have been made in connection with the raid.

The taskforce took to social media to share that the Walsall Taskforce had a productive afternoon discovering and taking a down a huge cannabis factory. The force counted nearly 600 cannabis plants with an estimated street value of £500,000 ($628,000).

Scottish Jeweller Set Up Grow Above His Shop

Iowa: Motorist charged for 1 gram marijuana in tupperware near Doon