It must come as a surprise to no one that they have to fund their civil war one way or another.

Piles of a white substance, inside commercial containers of different companies, food packages or tires of cars; such scenes have circulated on international media to document thwarting smuggling major drug shipments around the world. All these scenes showed that the source country is Syria.

Tons of drugs have been seized both in Italy and Saudi Arabia, preceded by seized shipments in both Egypt and the united Arab Emirates (UAE). Additionally, the Jordanian government has repeatedly declared foiling shipments of hashish and narcotic pills coming through the Syrian Desert towards Jordan to be later shipped to the countries of the Arab Gulf. 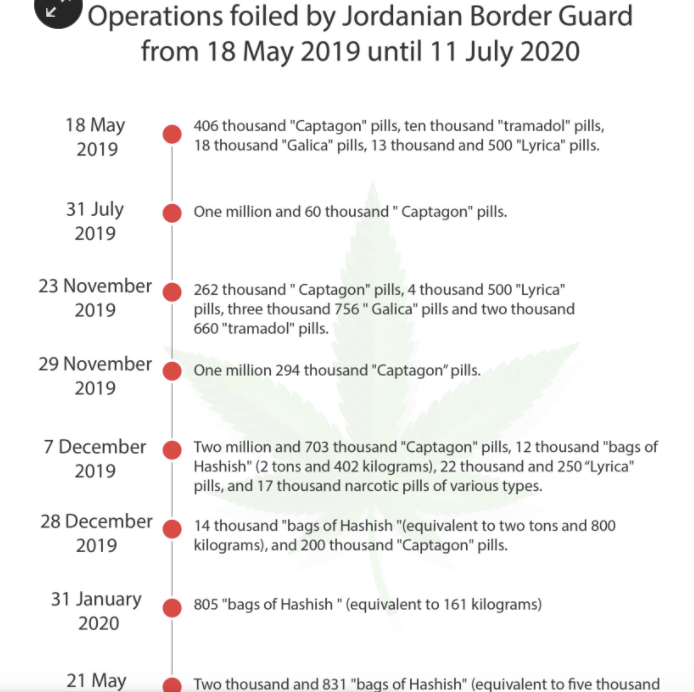 The Syrian regime authorities also launched campaigns to arrest drugs traffickers in their areas of control. The biggest campaign took place last January, after seizing a vehicle loaded with drugs, that was supposed to transport vegetables, between Daraa and As-Suwayda governorates. The amount of seized drugs was estimated at about one and a half tons of narcotic pills and hashish (500 bags of “Captagon” pills, and eight thousand and 516 bags of cannabis of various types), according to the Ministry of Interior in the regime’s government through its “Facebook” account.

In this file, Enab Baladi sheds light on the role of uncontrolled borders in Syria, the chaotic state which led to drug trafficking on a global level, as well as profits generated by this trade for traffickers. Though this file, Enab Baladi attempts to answer raised questions about the “Interpol’s” ability to pursue drug traffickers in case Syrian businessman and politicians’ involvement has been proven.

From Lebanon to Saudi Arabia, then to Italy … Syrian drugs all over the world

Within the border strip between Lebanon and Syria, which extends from the countryside of al Qunaitra, passing through al-Zabadani, Madaya and Qalamun western region in Damascus countryside until al-Qusayr, Talkalakh and the Mediterranean coast, this area has become famous for smuggling operations. In fact, it has witnessed several clashes between smugglers and the Syrian border guards (called Hajanah) prior to the Syrian revolution in March 2011.

In interview with Enab Baladi, the Information Unit Manager at Omran Center for Strategic Studies and military affairs researcher, Nawar Shaaban, said that smuggling operation is not a new phenomenon in Syria, but rather an “eternal profession.”

He added, smuggled materials were transported on horses and mules from Lebanon to Syria, which are separated by a rugged Qalamoun mountain range (eastern the Lebanese mountains), especially since imposing sanctions on the Syrian regime in 1979.

At that time, most of the “smuggled materials” included items which the Syrian market lacked, such as cloth, kitchen equipment, and other items that could be easily carried. Later, these smuggling operations expanded to include to timber and household items.

The Lebanese-Syrian borders are not the only smuggling portal. There are also Syria’s borders with Jordan and Iraq, especially after imposing U.S. economic sanctions on Iraq. In addition to its borders with Turkey, which have witnessed active operations during the Syrian revolution. Not to mention the coastal strip monopolized by men from the inner circle of the ruling family, who enjoy the widest authorities with al-Assad family’s rule.

Prior to the revolution, controlling cross-border smuggling was difficult, as smugglers were known for using weapons and their close relationships with security forces and “Hajanah Unit”. Consequently, it was difficult to control these operations, especially when residents of a particular village near borders work in smuggling, the area becomes almost fortified, as Shaaban put it.

Now, even with the regime promoting its return, controlling borders is still difficult. Russians, on the other hand, have tried to interfere in some areas at the end of 2018, such as al-Qusayr region in the western countryside of Homs. Back then, they tried to position themselves on borders in al-Dabousieh area, the “Arida” border crossing, near al-Qusayr; however, their attempts to control the crossings collided with a local force controlling these points and they ended up by withdrawing, according to Shaaban.

With the beginning of the Syrian revolution, smuggling became very active and included weapons, drugs, civilians and fighters. However, after closing international crossings, a new a group of smugglers, other than the traditional ones, raised to the surface under the name of “warlords”, who smuggles items and materials the state and regions lost because of war, as explained by Shaaban.

According to Shaaban, most of these “warlords” were unknown; yet, they took full control of the market by smuggling arms and drugs from and into the state.

Shaaban thinks that this state of chaos will continue within borders and controlling it during the coming period will be more difficult as reliance on it becomes greater, especially after “the Caesar Syria Civilian Protection Act”, known also as “Caesar Act” came into force.

Open Democracy Report: Psychedelics for systems change: could drugs help us save the planet?